I'm sure by now everyone's either saw or heard the event that took place in Calgary, AB on Saturday on CBC. The original plan was to see the one game, four on four, east vs west match at 4:30est until 6:00. And I'm sure you've heard by now that there was an injury in the rugby match that was being shown previous to the bowling. With all that aside, let's take a look in the event itself.

Given that there were only about four frames to see from the match, there was really limited footage to watch. I think that the competitors made the best of the time they had on television, though they were not originally aware that the were pushed to online streaming for the first six frames. I definitely noticed a friendly and enjoyable atmosphere, and with no real prize on the line other than bragging rights, it was to be expected. I think the game iteself was well represented by the bowlers themselves.

I'm definitely not trying to be over critical of what this event showed us, but I think there is a lot for us as a sport to learn, and a lot for CBC to learn as well. I know that the stations stay alive by their sponsors, but I found it extremely hard to keep excited about the match with the constant commercial breaks. I've always thought that a game with momentum is a game worth watching. I found myself flipping to college football during the commercials. This is a dangerous situation for our sport. To the average Canadian, it would be tough to pass up watching a fast paced football game for 5pin bowling.

I think that if there was sufficient time for the match, they could have really profiled the competitors themselves. I'd like to hear from them, see some personality (I was hoping to see some personality during the match but there was limited camera shots of the competitors after the ball was delivered) and something to root for or against. I also think that the commentators have to find a way to be a little more exciting as well. I've already heard from a lot of people about the commentating, and I think some improvement could be done in that regard.

In closing, I would like to say that CBC and C5 did a commendable job with this event. I know that the C5 was put under the gun with a very limited time frame to work with and hopefully if this event happens again next year, they will be able to make this something even bigger than it was this year. To the bowlers, you put on a great display, gave our game some exposure and looked to have some fun while you did so. You guys seemed determined to win, yet displayed it as a fun event. To CBC, thank you for bringing this Canadian game back on Canadian television and I hope that this is a long relationship between CBC and the C5PBA. I think that with some small improvements, this is something that can be really big for the thousands of bowlers across the country. 5pin is back on television, even if it wasn't a full game.

If you missed it or want to see it again, view the streaming from CBC Sports, HERE

For this week’s blog, I had originally intended to dig through some old Bowling News and use one, but I thought better of it with a televised tournament coming up this weekend. I wanted to turn my attention to this event, which will be aired on CBC this Saturday, September 17th, from 2:30pm - 4:00pm as part of “Sports day in Canada”. The event will be bowled in Calgary AB and features a 4 on 4 team event, East vs. West match up.

I’ve heard a lot of rumblings about this event right from the moment it was announced, mostly about how the criteria should have come about for picking the members on each team. I think it is important to understand that regardless how the tournament has come about, where it will take place or who was on the teams, we need to step back and realize that this is exposure for our sport. Bringing this event into the fold on national television can really help restore some of the profile our game has lost in the past with losing our televised events due to funding cutbacks. The important thing to remember is that this is a step in the right direction, leading us to more exposure and possible future opportunities down the road for similar events, and possibly bigger events.

Now with all that being said, I do offer a challenge to those who are competing. Make it exciting and worth watching. I recently had a discussion with some top notch bowlers after our first night of our pro league and we all seemed to agree on this premise. In the past, the competitors have generally played without much emotion or moxy. I challenge the competitors to give those who may flip to the channel to watch something to keep their attention. I’m not saying go out there and tarnish the game with attitude but there’s always been that lack of excitement. The PBA has really excelled in the way that they’ve created characters in the game; people to root for or against. They took the game and found a way to keep people’s attention. In the past, I’ve flipped on TSN to briefly watch the 5pin Championships, mostly to see if I know anyone who’s playing. I’ve found that even if I did know the people and were rooting for them, it felt mostly like any time I might see them on the lanes in league or in a tournament. I lacked the excitement needed to continue watching once the person I knew personally had lost. This is where we can change the look and image of our game.

I hope that during the televised event held this weekend, someone steps up to the plate, and delivers some excitement. I know regardless the event will be a great success and a great aide to our game, but let’s push things a little further and make the most of our air time. Let’s give the audience something worth watching, some entertainment, and most importantly, something to remember 5pin by.

5pin Bowling arrives in Maryland USA for a night!

July 9th 2011, a few of us 5pin bowlers had a unique opportunity south or the border. Myself, my girlfriend Jen Galbraith, Kristi Lampman, Brian Whalen and Connie Ward spent some time talking to our duckpin bowling friends in the United States to organize a “5Pin night” in Maryland. With the great help from Jason and Kari Saghy, we secured Edgemere Bowl for a few hours on Saturday night to set up 5pin bowling. Special thanks goes to Greg Crunkleton for not only allowing us to set up 5pin at his bowling alley, but even opening up the lanes specifically for us.

Lugging 2 sets of pins with us across the border, we didn’t really know what to expect. We briefly discussed our thoughts on what would happen in the car that contained myself, Jen, Kristi and Karole McDonnell. I thought realistically that we could get upwards of 20 people showing up to try a few frames to see what our game was like. Once we arrived in Maryland, we got confirmation that our event was definitely a go. We were able to tell a few of the DPBA and WNDA members the location and the 8pm start time during our respective shifts that we played. 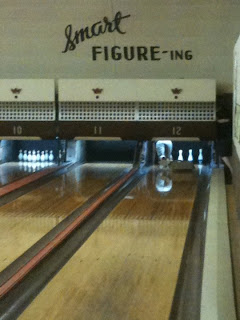 A bad start to the night was our late arrival to Edgemere but we were encouraged to see Kari and Jason waiting for us as well as Greg. Once we got things going, it seemed to operate quite smoothly. Kudos goes not only to Jen for spending A LOT of the time back behind the lanes setting up pins, but also to Jason Saghy and Greg Crunkleton for learning how our pins were set and also spending a large majority of the time behind the lanes setting up for those interested in trying. Greg later retired to tend to the bar, since the warm summer night left quite a few people craving a beverage of two. 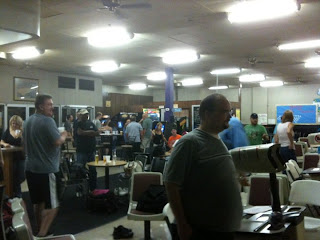 I remember at one specific point, where we allowed a few of our American friends to actually record a game (marked by Jen and Kristi) the bowling alley seemed to jump a few levels in noise. Jason and I peered through the crack of the masking units to see a packed bowling alley. More than a couple people observed it looked like a regular league night with roughly 50 people now in the bowling alley. What an amazing success. Everyone seemed to have a great time, as the Canadians in the bowling alley spent hours discussing the differences in our games as well as our countries. I can only speak for myself, but the pride I felt as not only a Canadian, but as a 5pin bowler as well was something I couldn’t describe. Talking with many of the people in attendance, I found great interest in our game from our American friends. I also found great results as well from them, with special mention going to Kari Saghy for her first ever 5pin game of 328, (I had to assure her that a 328 game was a great score for anyone, not just for someone who had never played before) and Rob Yowell who bowled a 274 game despite his 5 frame in there. 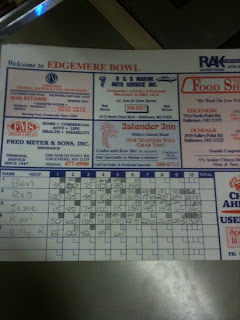 I think the most tell tale sign that this night was a success was during the following day, while playing in the Sunday playoffs in our DPBA event, I spent a fair amount of time talking to people about our event, and assuring them that we would also try to set up another similar event for those who never got the chance to try. I’ve always felt that the games of 5pin and duckpin have a lot to learn from each other and that they can strive together and this could be the first step in showing that to our fellow Canadians playing 5pin. Before long, we could be competing in 5pin events against Americans just as the duck inners do with the Canadians on the DPBA and WNDA tours. With the numbers in our events steadily declining, we welcome any players to our tournaments, whether they be Canadian or not.

Jeff Young
Posted by 5pincanada at 11:37 AM No comments:

Got Something To Say?

Send your thoughts, questions or comments to fivepinblog@live.ca